Hanuman is half monkey and half human.  There are many stories about him and most highlight his amazing magical powers such as flight, the ability to change size, and immortality.  As a child these gifts often got him into mischief and drove people to avoid him.  As he matured he realized his gifts were tools and advantages that made him uniquely powerful.

Hanuman developed an intense devotion for Rama.  Rather than getting into trouble, he started using his gifts to help Rama and defend his friends.  Because Hanuman was acting in service, others were inspired to help when he needed them.  He is now revered both for his special strengths and for the way he used them.

Humans also have amazing abilities.  Though they may not sound exciting, courage, generosity and empathy are tools to guide our actions.  At times our abilities seem to make us different or weird; they may set us apart in uncomfortable ways.  Dig a little deeper and they become super powers that make us uniquely suited to helping our friends or bringing our beliefs to life. 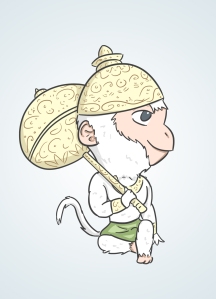